A Modern Victorian in San Francisco

The Victorian houses in San Francisco are typified by wonderful gracious tall ceilings but cozy small individual rooms with a lot of circulation. Lots are only 25 feet wide and a comfortable sized room could easily take up that width, but in Victorian times, the rooms were connected by hallways which made the living spaces even narrower. In addition, kitchens were service areas and they were intentionally separated out from the living spaces since they were usually staffed with outside help.

Our project consisted of a remodel of a house built in 1903 that was in very good condition. It nevertheless had the typical layout of long hallways and as far as the kitchen was concerned, there was only a sink and a five foot countertop in a small room with too many doors. The room had just a chimney and most likely there had been a stove but there was no counter around where the chimney was and no upper cabinets to speak of. There was a separate hallway to access this room and a very small double acting door to the dining room.

In the contemporary age, we like to have kitchens open up to living spaces and we desire a kitchen to be the warm and inviting center of the home. The question we asked ourselves in this project was, how do we create a modern, functional and inviting kitchen with lots of light without breaking up the character and period details of the house. The simple answer was to create a separate yet complimentary aesthetic. We preserved the living areas with their original details but we designed the new areas with modern details. The materials we chose would be the blending elements between Victorian and modern.

Working with these two aesthetics came down to a core decision in the transition between old space and new. First was to improve the flow between the dining room and kitchen which we did by widening the opening between the spaces. Rather than remove the wall we decided to keep with the traditional and have a separate but open kitchen. The dining room had the period details and trim which we ended there at that opening. The kitchen would be all new and would be designed with modern detailing. We designed the trim in the dining room side of the opening with matching traditional trim and the kitchen side of the opening with minimal flat trim. We made the kitchen bigger by adding a small addition and opened the kitchen onto the back yard with a new deck and sliding patio door.

The new island incorporates seating and we also added a window seat for a breakfast table. The sink resides on the island while the range and refrigerator are in a galley configuration along the back wall. To make the stove wall more open, we designed free floating shelves rather than upper cabinets. The shelves have LED strip lighting built in to add more light as well.

We chose clear walnut for the cabinetry with marble counters, both reminiscent of Victorian details. The cabinet drawers are flat slab with cut out pulls. The tile backsplash is from Heath Ceramics. The floor is a stone tile in a herringbone pattern from Ann Sacks. We added daylight in the new space with a set of double hung windows designed to match all of the old existing ones. We added a skylight and clerestory window above the patio door.

We also reworked the upstairs bathroom.

This was originally a small room with a tub and a sink. The toilet was in its own water closet off the main hallway next door. We moved the toilet room into a second closet and gave the space that was the w.c. over to the bathroom. This allowed us to configure a shower and double vanity into the bathroom layout.

The mirror is framed in walnut. It is a piece of furniture on the wall similar to what one would see in a Victorian home. We then modernized this piece with clean lines and a very large piece of glass. The faucets were wall mounted through the mirror’s frame. With a nod to the traditional forms and materials, we designed marble floor and shower tile. The individual marble sinks sit on the walnut cabinet not unlike the marble vanity in the before photo. The vanity also is designed to be like an individual piece of furniture. There was a healthy melding of old and new in the final touch with the decision to use wallpaper. The wallpaper itself is a traditional material but the pattern is very contemporary.

This project is published California Home and Design. It successfully bridges the divide of contemporary and Victorian aesthetics. This project resulted from a lot of collaboration with the owners and contractor working together. Successful design is expressed in the final results as well as a successful process, decisions that are made along the way that not only keep the goal and vision in place but also stick to difficult budgets and schedules. We conclude with a thank you to our contractor, Dijeau Poage Construction, and thank you to our clients. 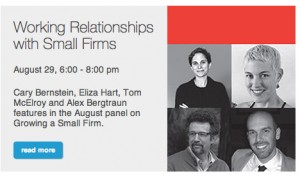